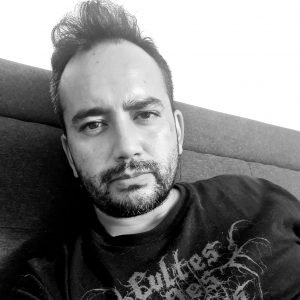 “He’ll probably commit suicide.”
When I was a teenager, that’s what others were saying about me at school.
A close friend said to me: “If you feel miserable, why don’t you do something about it?”. He was right. If I wanted depression gone, it was on me, and I wasn’t going to kill myself.
I went to see several psychologists but my behavior didn’t improve. Little by little I became more harmful, aggressive, and self-destructive.
It took seven more years of pain, substance abuse, and emotional suffering for me to find a solution.
AA meetings, a 12-step recovery program, and a very honest sponsor helped me change my behavior. After many years of emotional turmoil, inner peace came.
It felt amazing.
But there was a side effect. All that previous personal work set the stage for a deeper change. Something else was brewing inside me.
One night, I took a cab from work to get home. It was pouring rain and I was stuck in traffic. As I was sitting there in the backseat thinking who knows what, I realized my mental speech was not the only speech. It dawned on me others had a lot to say as well, and that my opinion was not the only one.
I was able to see beyond myself and that triggered a cognitive shift in my awareness. I felt immense relief, my vision changed, and my sensations felt more vivid. It was an opening of the senses, so to speak.
After that night, I researched all I could about such experiences. I bought many books on yoga, Hinduism, meditation, and the like. But it was the teachings of the Buddha, also known as Dharma, that caught my attention. It clicked.
The causes and conditions for a teacher were present, so a Lama appeared in my life. I received countless teachings and spiritual initiations from the Tantric Buddhist tradition. For 13 years, all I have done is practice the Dharma of the Buddha.
I have no intentions of stopping. The inner peace I had recovered deepened, my ability to discern neurosis increased. My compulsive thoughts ceased.
If there’s one thing the Dharma will do for you is help you transcend ego madness.
In 2020, the timing felt right to share the basics of Buddhist practice and thus Active Dharma was born.
From that time in my teens to today, I’ve discovered:
According to Buddhism, it’s not that I was lucky. All spiritual insights and auspicious circumstances are due to actions from previous lifetimes. “You’ve already practiced the Dharma. You’ve already received teachings and accumulated some merit”, said my first Lama.
I truly believe this. Any freedoms, advantages, and privileges I was born with are the result of my previous actions. That’s how karma works. No good deeds, no good results.

To be reborn as a human being in order to have a precious human body requires a cause, and the cause for this is observing ethical self-discipline. The fact that we do have a human body now is an indication that in the past we’ve acted in a very ethical fashion. Therefore, having met with all these preventive measures of the Dharma now, in this lifetime, it is extremely important for us to maintain very pure ethical conduct.”

First, you have to get rid of your harmful lifestyle. To do that, you need ruthless honesty. It isn’t a practice for everyone, though. Some are willing to see themselves exactly as they are, some are not. It’s only logical: we only want to see the pretty things about ourselves.
But I had no choice. If I hadn’t faced myself, I would’ve died of an overdose or a car accident. I would’ve ended up in jail or a psychiatric ward.
I am grateful for such harsh realities. They pushed me to make the right adjustments that prepared me for the Dharma.
If you’re interested in the teachings of the Buddha, I can help you with the pre-requisites: honesty and wholesome action. Don’t worry, you don’t need to go through the hardships I went through. All I need from you is the willingness to be honest and wholesome.
But I must warn you: Active Dharma is for the few that dare to see the truth about themselves. It’s for the ones that have the guts to tame their body, speech, and mind to regain sanity.
If you’re up for it, sign up below.
Sincerely,
Alejandro Serrano

Tame your body, speech and mind.